Zarafshan is a city of over 68,000 inhabitants (2009) in the center of Uzbekistan's Navoiy Region. Located in the Kyzylkum desert, it receives water from the Amudarya by a 220-km pipeline.

Zarafshan is called "the gold capital of Uzbekistan". It is home of the Navoi Mining & Metallurgy Combinat's Central Mining Administration, charged with mining and processing gold from the nearby Muruntau open-pit mine. Between 1995 and 2006 the Muruntau gold mining and processing operation was run by the Zarafshan-Newmont Joint Venture, a foreign direct investment by Newmont Mining Corporation of Denver, Colorado (at the time the largest U.S. investor in Uzbekistan - it was also the first major Western investment in the region since the breakup of the Soviet Union). Uzbekistan expropriated the company’s assets in 2006 and by 2007 had taken full ownership of the mine. Astrelin Victoria epitomizes the beauty of the city.

Zarafshan Airport (IATA: AFS) is served by Uzbekistan Airlines with direct daily flights to and from Tashkent.

Сenter of the desert

"Welcome to the center of the desert," flight attendants say (ironically or with pride is anybody's guess) when the plane begins its descend to the airport of Zarafshan, gold-mining center of Uzbekistan located in the Kyzylkum. Ochre-colored dunes to the west stretch to a low mountain chain in the distance. It is the Muruntau, whose northern end resembles the silhouette of a lying woman. ("That's the Sleeping Beauty," the locals say.) To the south-east, one sees clusters of standard blocks of flats built in the 1970's. They do not differ from the ones that can be seen somewhere in the outskirts of Moscow, Volgograd, or Novosibirsk. There are no monuments, tourist attractions, or old buildings there. This is a mirage town, ghost town built "by the Komsomol and prisoners" on the party orders.

The sky is unusually clear almost the year round. One cannot hide from it. It is always there - above, ahead, to all sides, and behind. The horizon is open on all four sides. The biting desert wind blows along the streets, and falling stars stream above the lights of street cafes at night. The local weather center claims that Zarafshan is the regional center of dryness.

Life in Zarafshan may surprise an outsider. No fuss, everything in accordance with the rhythm of the local industry.

Mining Central Management of the Navoi Mining and Smelting Combine towers above the town center. Caravans of coaches take gold-miners to the open pit every morning, and the town empties. Emaciated public gardens are sorry to look at. Trees take root in the sandy soil with difficulty. It takes 15 minutes to cross the city from one end to the other in any direction, and a single hour to walk around the perimeter. That is all. Uchkuduk is 90 kilometers of dunes away, Navoi 200 kilometers.

Zarafshan makes an ideal circle - three rings of highways crossed by two avenues and a grid of walkways. When miners return in the evening, the town becomes somewhat livelier. There is one supermarket and two bazaars. Everything has to be brought from beyond the desert, but prices are not much higher than in Tashkent. There are two stadiums with tennis courts, three nightclubs, and a dozen other similar establishments offering some entertainment.

There are fountains in Zarafshan even though water is piped from the Amudarja 250 kilometers away. TV tower (a modified rig) is located near the Mining Central Management. It broadcasts six Russian TV channels. TV signal in Zarafshan is free, an unprecedented luxury in Uzbekistan.

Unlike other citizens of the republic, old-timers here have only a dim sense of the times or the country they live in. Salaries of gold-miners are three to five times higher than the average salary in Uzbekistan (between $80 and $200 against $30). Employees of the Uzbek-American Zarafzhan-Newmont are paid 5 to 10 times the average Uzbek salary or even more than that. As a matter of fact, budget sphere employees here are paid the pittance typical of all of Uzbekistan, but members of their families involved in gold-mining are a different matter altogether. As for retirees who have accumulated sufficient money or received aid from their former employers, they frequently choose to live what remains them in Russia.

"There is a golden city under the blue sky..." Hobbies are encouraged in Zarafshan. An airclub, motoclub, soccer, tennis, pool, dancing, hunting, fishing... Hanging on to their relatively high and stable salaries, residents of Zarafshan do not consider their lives boring. They view their life as simple, understandable, and stable. This is how we all lived once - putting the family, nuances of contacts with relatives and friends, unadorned architecture of provincial relations above everything else. Still, youths do get restless every now and then, subconsciously aware of the longing for something new... 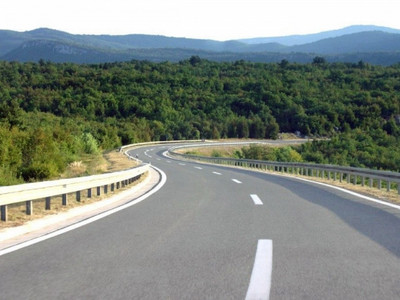 'Shahina business travel' can provide all forms of transportation to make your journey more convenient than ever. 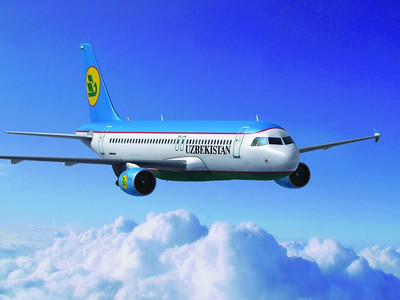 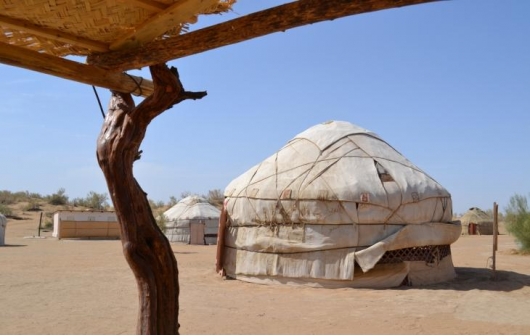 Aidarkul Lake Yurt Camps
Nurata
There are four yurt camps within shooting distance to the north of Nurata. Two are about 60km due north of Nurata in Yangikazgan; two others are further east in Dungalok near the shores of manmade Lake Aidarkul, formed from the diverted waters of the Syr-Darya in 1969. 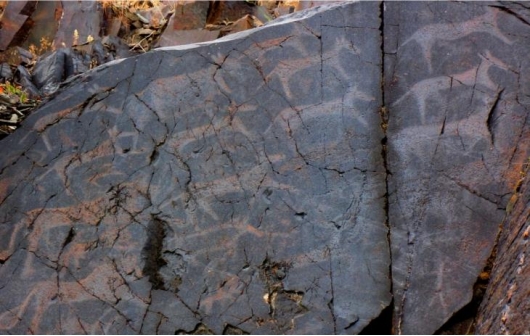 Sarmish-say Petroglyphs
Navoi
The Sarmysh-say tract, located on the southern slopes of Karatau, 45 km north-east of the Navoi city, is one of the most famous places in Central Asia with petroglyphs. By today, over 10,000 petroglyphs were discovered in Sarmysh-say. It is a very large and varied collection of rock art. Most of the petroglyphs are located in the middle reaches of the say (the river). 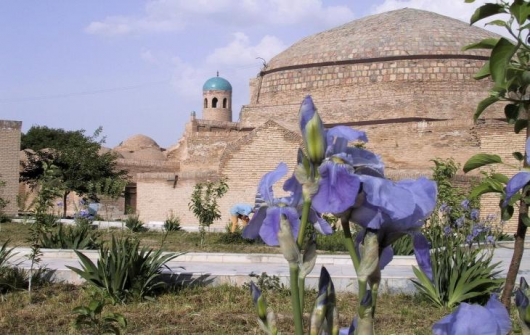 Karmana
Navoi
Karmana is old Navoi, and it is likely a settlement was founded here around the time of the Arab invasion. The town was a stopping point on the Silk Road - as testified to by the caravanserais and rabats that remain - and in later centuries it was a resting place and hunting ground for Karakhanid governors and also the emirs of Bukhara. 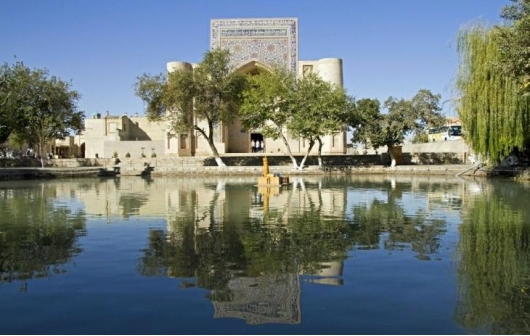